This discipline has been halted due to the Liberal Government's recent Order in Council ban on assault rifles... eff 1 May 2020

CQB practices and matches contribute to both rifle and pistol marksmanship and are conducted under military conditions. Basically, it is a military style of shooting drill while carrying all your ammunition and required equipment with you. The practices and matches are fired at short distances of from 40 yards to 10 yards using military style of semi-automatic carbine rifles (30 rounds) and pistols (10 rounds). Carbine/rifle loaded at 40 yd. mark, firing from standing at 30 yds, and firing while moving forward from 20 yds to 10 yds; and then transitioning to 10 rounds pistol after an RSO-cleared rifle.

Rifle ammunition is limited to the lighter 5.56 mm, 7.62 x 39 mm, .30 carbine and appropriate pistol caliber carbines. Pistol ammunition of any military caliber can be used.

Training and advice will be given so all shooting skill levels are welcome to try this challenging sport. All our CQB drills are carried out under the direct control of a qualified Range Safety Officer and assisted by several Line Safety Officers. Usual setup is shown below.

Any member who wishes to come out and participate and shoot the match in September, must attend at least 2 of the Thursday training sessions, and shoot a minimum of 3 relays. 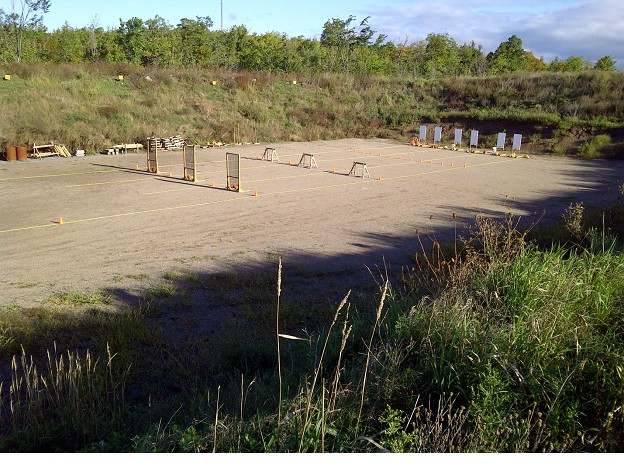 Use of a sling at FRPC